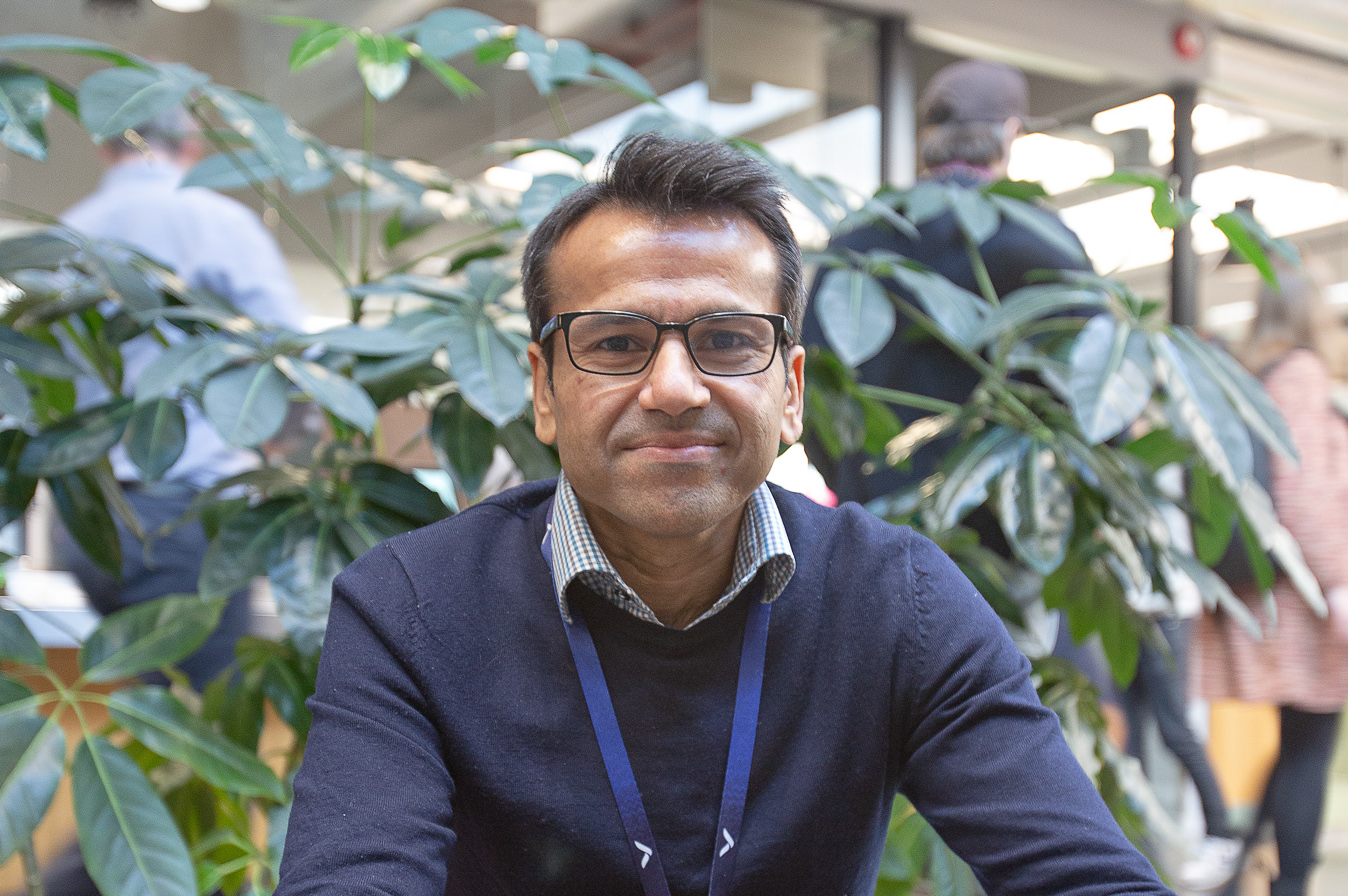 He makes your day-to-day life easier

He makes your day-to-day life easier

Maqsood Ali Bhatti (47) and the rest of the IT team at the Elkjøp Nordic head office do everything they can to ensure a simpler day-to-day life for both customers and colleagues. When he feels stuck, he goes for a long run. Or he plays music!

As children in Pakistan, Maqsood and his brothers busied themselves for hours with programming and music in the bedroom they shared. After school and nearly every weekend, they sat composing music on a computer. This was before the internet. Maqsood still has a passion for both technology and music. At Elkjøp Nordic, he leads an IT security team of four. He also plays keyboard in a band called 'The Retailers' along with six colleagues from different departments at Elkjøp. They perform concerts at numerous Elkjøp events.

"IT is very creative. It reminds me a bit of composing music. Both involve a creative process. And when I feel stuck, which I often do when trying to create something new, whether it's IT or music, I need to take a break. When I return, I can look at it with fresh eyes," he says.

His breaks often involve going for long runs, something he does up to 3 to 4 times a week, often 12 kilometres at a time. He either runs around the city of Drammen, where he lives with his wife and two daughters, or he takes a path along the Aker River flowing just outside the Elkjøp Nordic head office in Nydalen.

Nearly 500 people work at our head office. The IT department has around 100 employees. When Elkjøp was established 60 years ago, only one person worked in the IT department. Since then, IT has become increasingly important for ensuring cost efficiency for the company.

"We work closely with all departments. The IT staff helps the company maintain stable and scalable systems to manage our steady growth. If people were to perform the same tasks as machines, we would need to have twice as many employees in the entire company", says Maqsood.

He regularly has lunch with colleagues from different departments to learn what type of challenges they encounter during their work days. He can then explore whether he and his team can solve the issues with technology.

"If I know what tasks people are spending a lot of time on, often repeatedly, I can try to automate those tasks. Machines are very good at performing repetitive tasks, as long as you program them correctly," says Maqsood.

He has programmed more than 200 automated IT systems.

"Through automation, the company can save a lot of money, and the larger the company, the more important that is. Elkjøp has a large number of employees. During the course of a year, we may have several thousand new hires, employees who change roles, or who resign. We have therefore automated the entire employee cycle and the access they have to different systems, which means that staff in the stores can spend more time on customers and sales, and less time on administration.

Maqsood moved from Pakistan to Norway 20 years ago, after marrying Norwegian-Pakistani Tina. They settled down in her home town of Drammen, outside Oslo. Maqsood, who had an IT education from Pakistan and many years of experience as a developer and programmer, hoped and believed that it would be easy to get into the Norwegian job market. Unfortunately, it was anything but easy.

"The major problem was the language. English is the common work language in Pakistan, and I thought it would be the same in Norway. I sent out job applications in English but was never invited for an interview. "It was a difficult time," says Maqsood.

English is now a common work language in Norway as well, but that's not how it was 20 years ago

‍Maqsood started a Norwegian language course and received help from local authorities to apply for jobs.

"It took time before they came to realise that I had ambitions and a higher education that I wanted to use. Eventually, I was fortunate enough to meet a very pleasant consultant who understood me. She helped me write applications in Norwegian, and I was immediately invited to two job interviews. Things improved after that," says Maqsood, who was offered a job at both companies. Maqsood accepted a position with Itera, which then hired him out to Elkjøp Nordic as a consultant three days a week. After nearly four years as a hired consultant, Maqsood was offered a position at Elkjøp Nordic, which was expanding its IT department. For Maqsood, this was an easy choice.

"In a permanent position with a company, you have access to more information and insight into the problems the company is facing. That makes it easier to do a good job. In order to come up with an optimal solution to an issue, it is important to know why a solution is needed," says Maqsood.

‍There are considerable differences between working in Pakistan and working in Norway.

"In Pakistan, there is a much greater distance between the manager and employees. Here in Norway, the organisational structure is flatter. Everyone is a colleague. In Pakistan, you often say "yes" to be polite, even if you haven't entirely understood the task. While here, you can let people know if there is something you haven't understood," says Maqsood, who speaks with a trace of a Sunnmøre dialect.

‍Where did you get your accent?
Maqsood chuckles.

"Our manager is from Sunnmøre, and so was the previous manager. That has probably influenced me. At my very first job interview, I just sat there smiling and nodding. I couldn't understand a word of the dialect. Fortunately, I got the job anyway. From a professional perspective, he understood what kind of work I did," says Maqsood, whose native language is Sindhi.

There were continuous language problems at first. His colleagues spoke various Norwegian dialects, which were difficult to understand, and some spoke other Scandinavian languages. Maqsood smiles as he reminisces.

"At a meeting with Danish colleagues, I didn't understand a word. They asked me lots of questions, but I just sat there nodding and smiling," says Maqsood.

He took it in good spirits.

"There have been many such incidents. Once I had a Swedish colleague who e-mailed me to say that he couldn't attend a meeting. He wrote something like 'tyvär inte kunne komma' and 'jag hoppas ni har et trevligt møte'. I interpreted 'tyvär' as 'thieves', and 'hoppas' as 'hopped, and 'ni' as the number nine. So I told the others he couldn't come because he had caught some thieves and had hopped nine times.

There were always episodes like this we could laugh about, among both friends and colleagues

"Yes, because I've been extremely lucky to have good and very inclusive colleagues who always give me honest feedback. This have helped me develop. And when I don't understand something, it always helps to take it in good fun!"

And when you don't understand, do you nod and smile or do you let them know?

"Now I always let them know!" 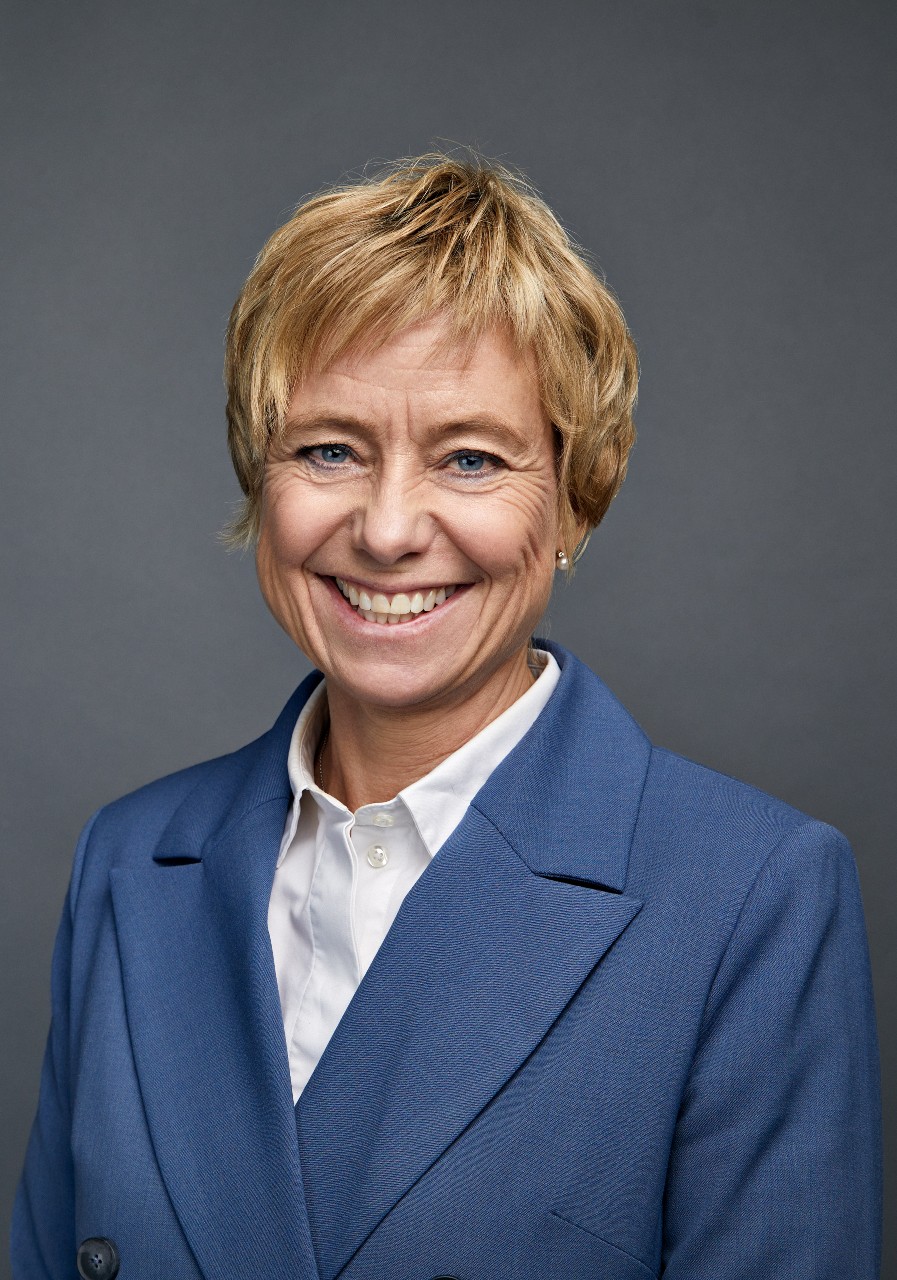 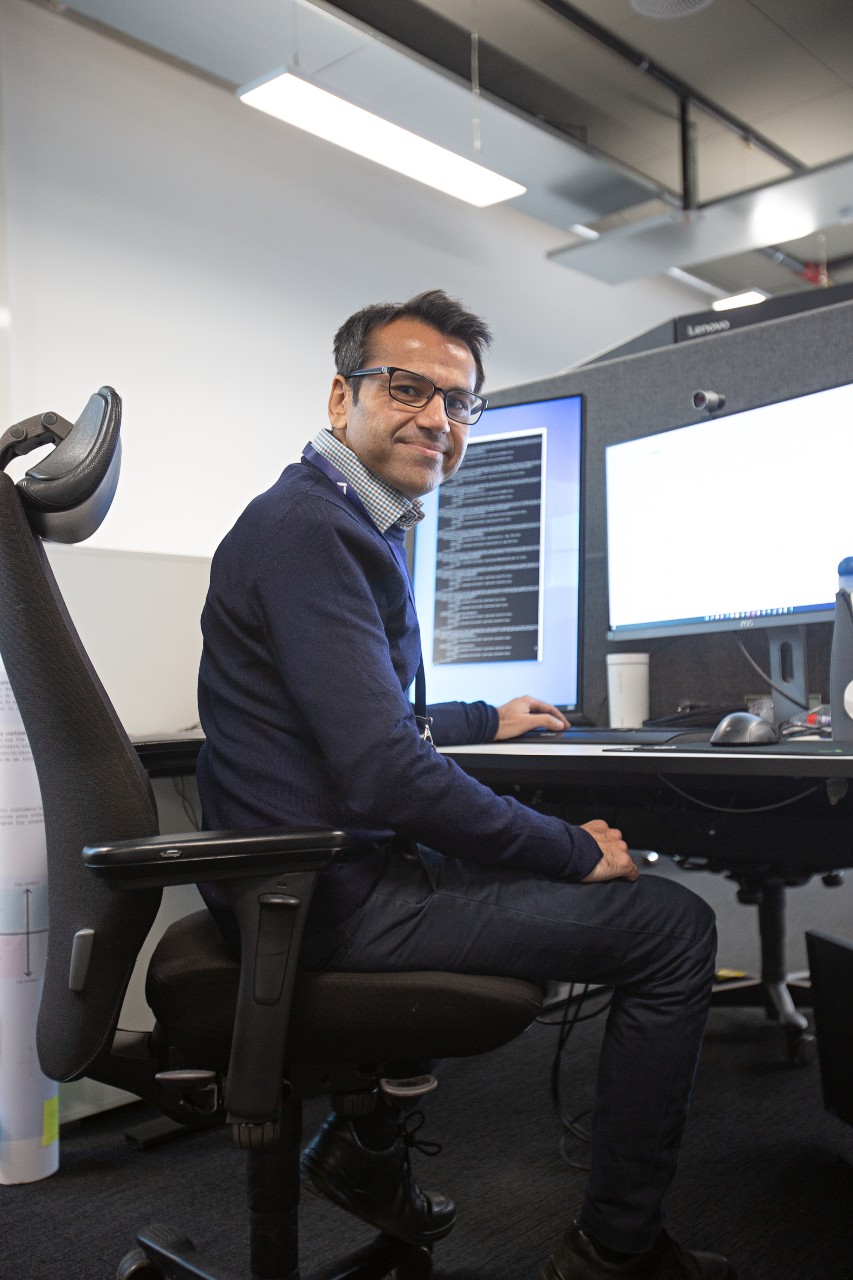 Stable: "We help the company maintain stable and scalable systems to manage our steady growth". 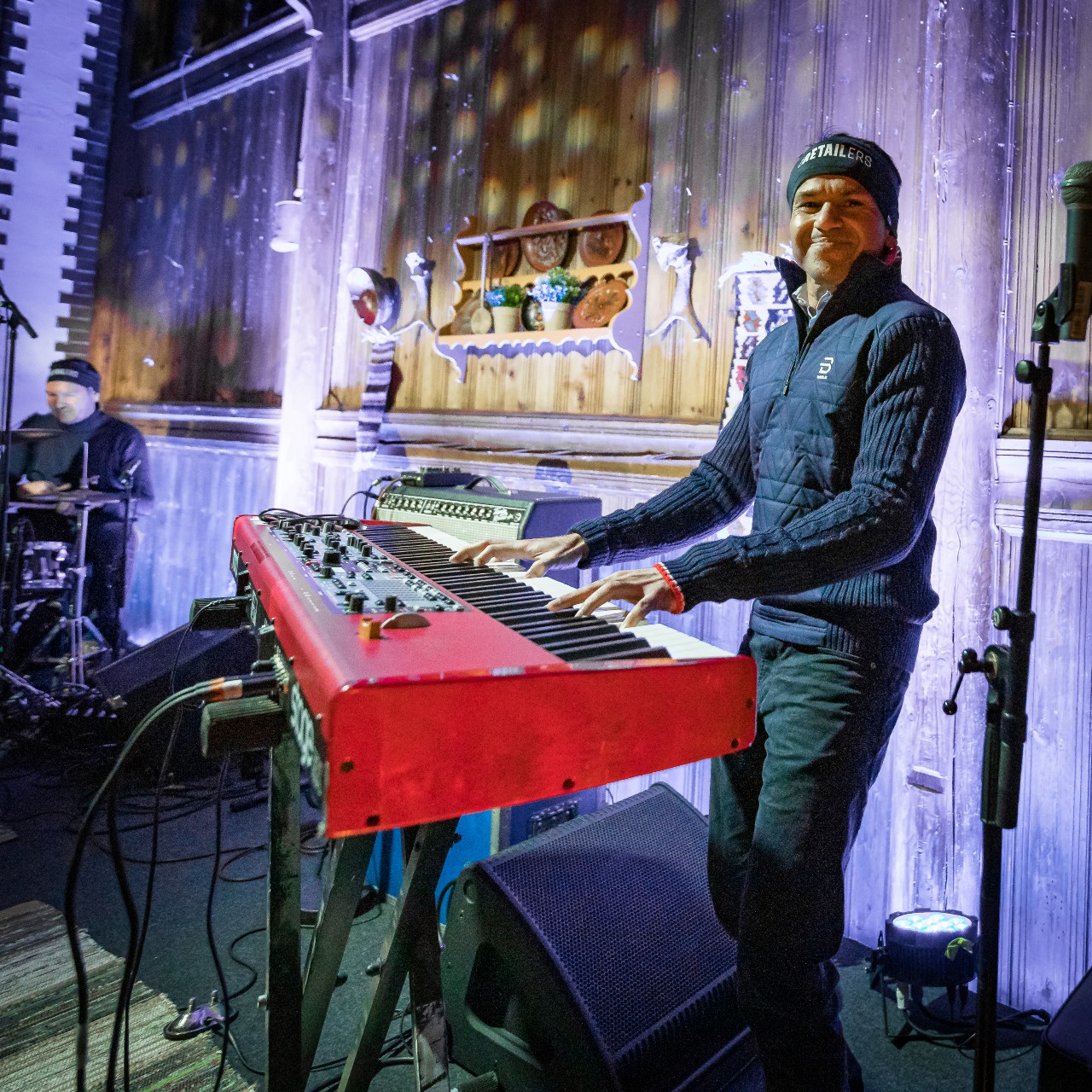 In-house-band: Maqsood plays in a band called «Jannicke & The Retailers» along with six Elkjøp colleagues.

"Running gives me energy and new ideas, which helps me solve problems both at work and in my private life" 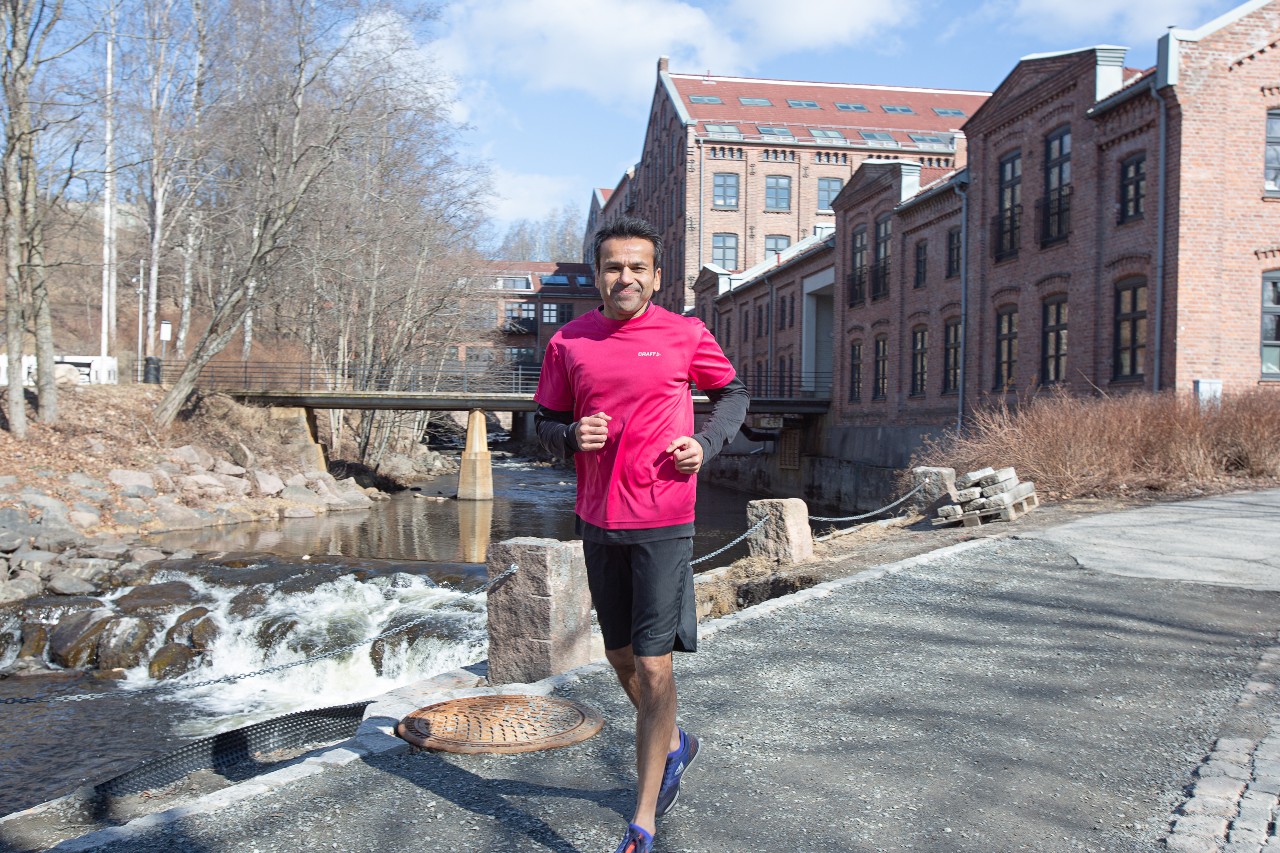 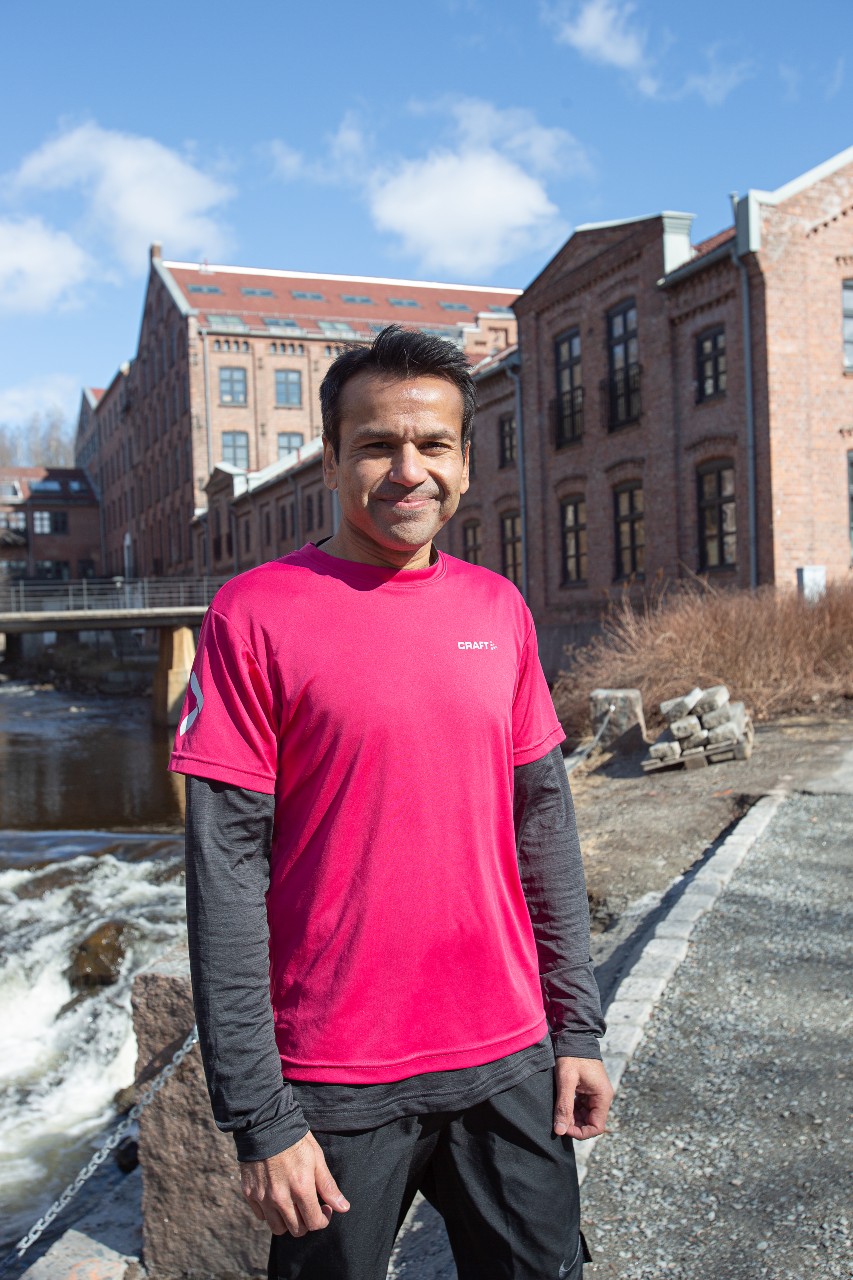 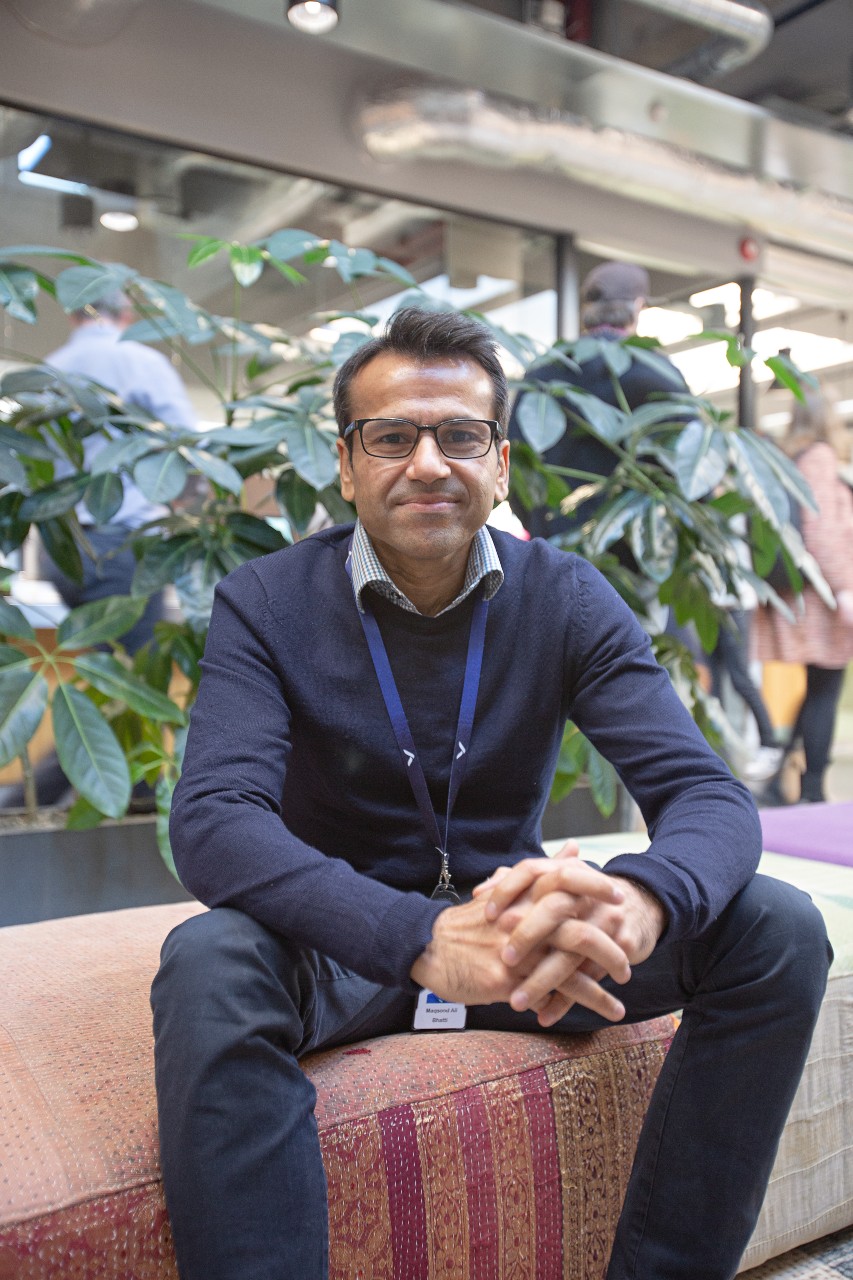 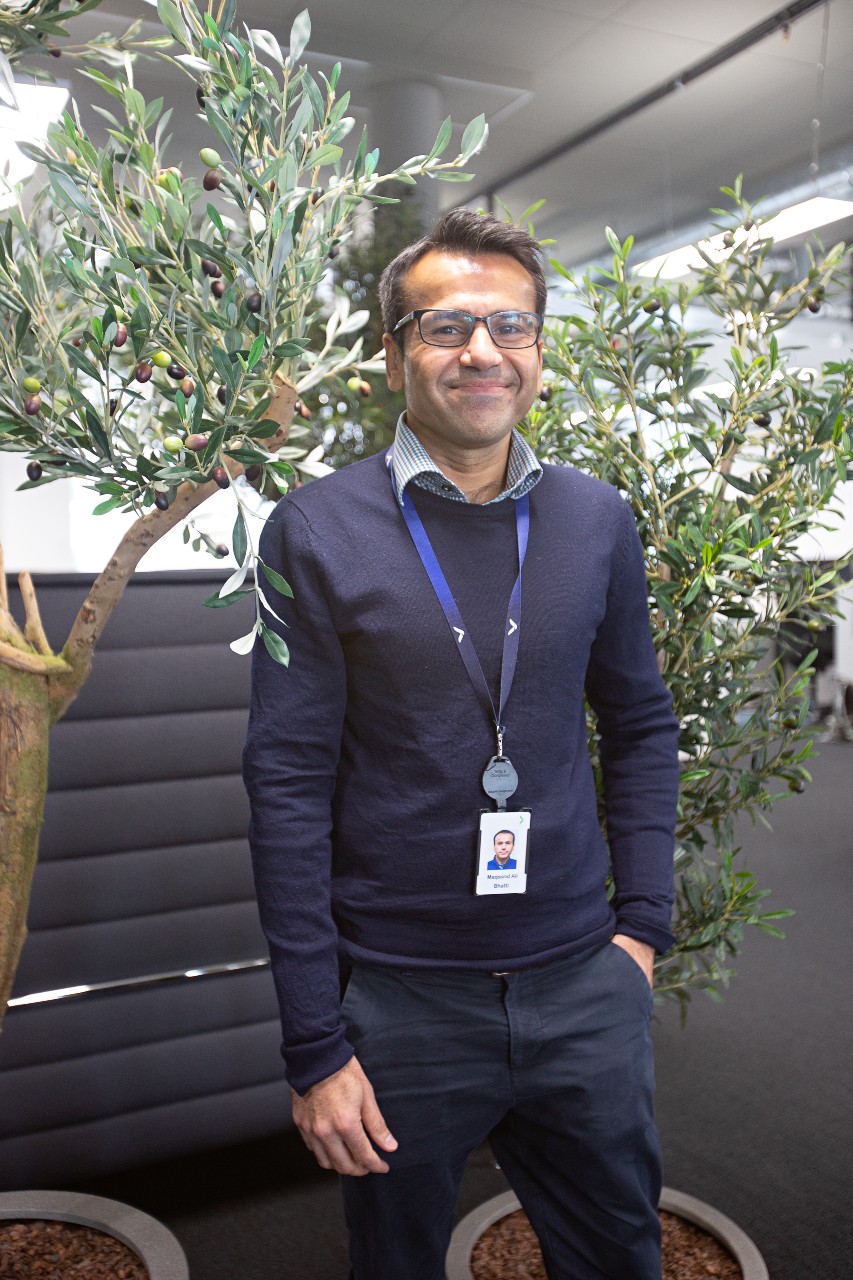 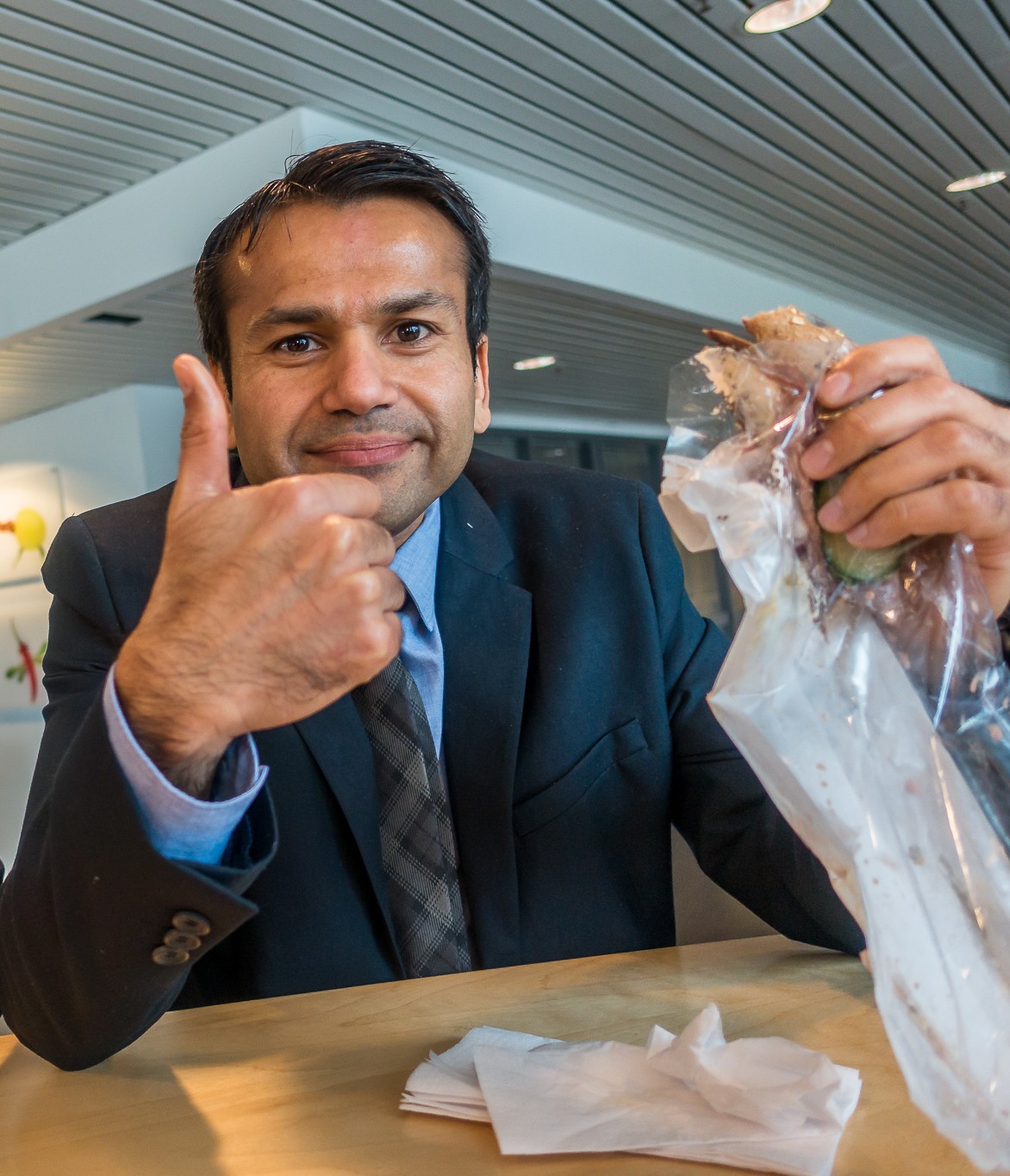